You are here: Home / The Bells of St John the Evangelist, Dumfries

The Bells of St John the Evangelist, Dumfries 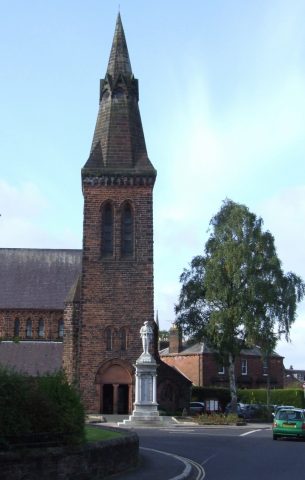 The church was built in 1867/8 and one bell, cast by John Taylor of Loughborough, was installed in the tower nineteen years later, on a wooden frame and suspended on plain bearings – both typical of 19th century practice. This bell was hung for full circle ringing with stay, slider & wheel but it is now only used for chiming. 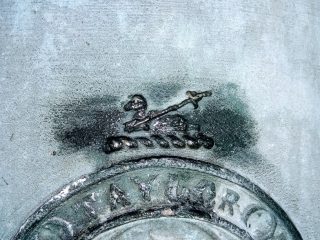 In 2007 surveyors came to inspect this bell and noted that the tower was large enough for a six or eight bell frame suitable for full circle ringing. The surveyors continued on to the Mount Zion church of the former children’s home at Quarriers Village, Bridge of Weir, which had been equipped with a set of 12 bells cast by Gillett & Johnston of Croydon in 1946 and which were now surplus to requirements. They were recasts of 10 bells first made in 1886 by Llewellin & James of Bristol and were given by the two sisters of Glasgow drysalter Allan Dick (1822-1885) in his memory. These 12 bells were acquired by the Keltek Trust which made 5 of them available to Dumfries to form the back 5 of a possible 6 or 8 bell ring. 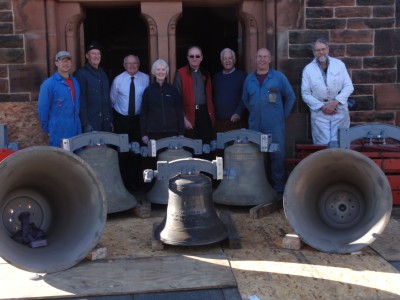 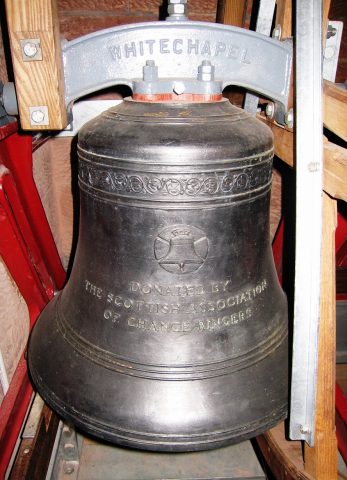 A modern steel & cast iron 8 bell frame was installed in the tower in the autumn of 2013 and the Whitechapel Foundry cast one bell – paid for by the Scottish Association of Change Ringers and with its logo incorporated in the design. . This and the 5 refurbished bells from Quarriers Village were installed in early November 2013 followed in February 2014 by the final two new trebles. The first of these was donated by the Holywood Trust and the second by members of the Clark-Maxwell family in memory of the Revd Prebendary William Gilchrist Clark-Maxwell. This is the only set of full circle bells in southern Scotland.

Press the play button to hear the bells.

The band comprises experienced ringers who learnt to ring in England and who moved to South West Scotland; in addition a number of new local recruits have been trained. 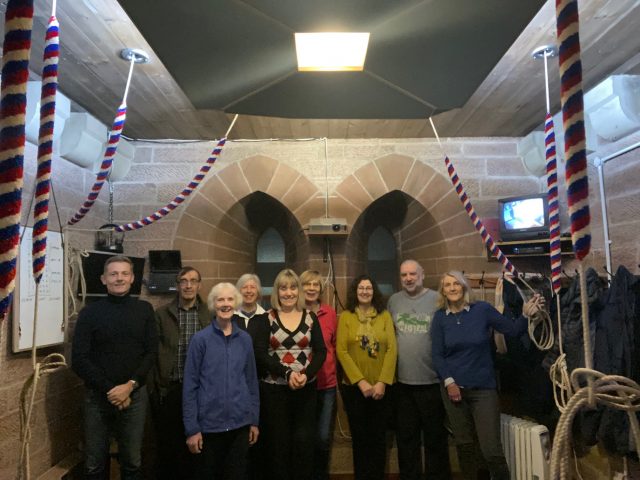 On the last Thursday of the month after practice finishes we adjourn to the Station Hotel for liquid refreshments, and visitors are welcome to join us. We are one of twenty two towers affiliated to the Scottish Association of Change Ringers. (https://www.sacr.org/index.php).

When do we ring?

Practices are held on a Thursday evening from 19.30 to 21.00 on open bells. A simulator is available for teaching new learners. Visitors are very welcome but are advised to contact our Tower Secretary first (dumfries AT sacr DOT org). Sunday ringing starts at 10.10 am and runs until 10.55 am. There is no practice during Holy Week and during the festive season holidays may prevent a practice taking place. We also ring for weddings and other major services and local events such as Guid Nychburris Day, as well as national occasions such as Remembrance Sunday and the anniversary of VE day.

How can you find us?

The church is located at the junction of Newall Terrace and Lovers Walk close to the centre of Dumfries (Postcode DG1 1LW) and is very near Dumfries railway station. There is a small car park adjacent to the church and free on street parking. Expect to take around 35 minutes driving from the M74 J22 or J15. The Ordnance Survey reference is NX974764. Entrance to the ringing room is from a door in the main entrance porch and up a short spiral staircase of 22 steps.